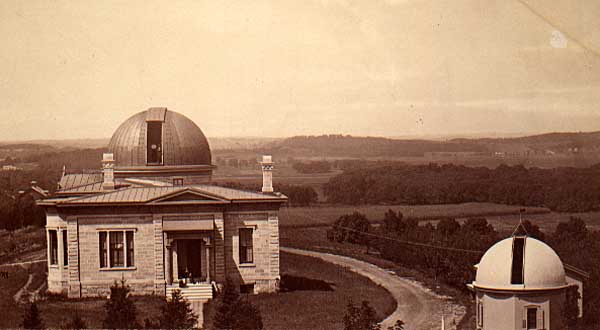 Historic Washburn Observatory has been the home of the L&S Honors Program since July 2009, following a complete, historic renovation of the UW landmark (listed in 1985 on the National Register of Historic Places). The Department of Astronomy continues to operate the 15-inch refractor located on the second floor observatory deck underneath the facility’s dome, and provides public observing and educational opportunities at Washburn. Visit the Department of Astronomy’s Twitter account to view the public observation schedule.

A Brief History of Washburn Observatory

The Observatory is named after former Wisconsin governor Cadwallader C. Washburn, who, in 1876, allocated a sum of $3000 per year over 3 years for the creation of an observatory for the University of Wisconsin. At the time, $3000 represented a seventh of the University’s state-funded budget!

On Sept 19, 1877, John Bascom, the president of UW at the time, announced that the observatory would be built and that it should be larger than the 15-inch refractor at Harvard. The observatory was started in May of 1878 with a contract with the famous Alvan Clark family to build the telescope. It was decided that the telescope would have a diameter of 15.6 inches, which would make it the third largest in the United States. James C. Watson was appointed to be the first director of the Observatory, but he died before its completion in 1881.

The telescope was used heavily from the 1880’s until 1958 when the new Pine Bluff Observatory, about 15 miles from Madison, was dedicated.

For a more complete history of Washburn Observatory, please follow the link below.